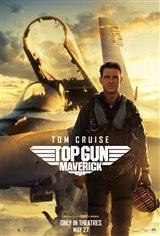 More than 30 years after the events that took place in Top Gun, Maverick (Tom Cruise) hasn't changed much. He still loves the adrenaline rush he gets from going fast, whether it's in a plane or on a motorcycle.

As a decorated pilot, with combat medals and citations to his name, he should be a two-star Admiral at this point, but he's happy with the title of Captain. Titles don't matter much to Maverick, who just wants to serve his country the way he knows best — behind the cockpit of a fighter jet.

He also has a new assignment. The new flight instructor of Top Gun, he has to guide the new recruits, including Bradley Bradshaw (Miles Teller), the son of Maverick's late flight partner, Nick "Goose" Bradshaw.