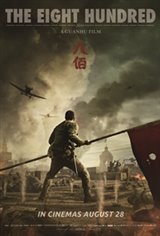 Shanghai, China, 1937. When Shanghai falls to the Japanese after nearly three months of resistance, General Chiang Kai Shek orders several hundred soldiers from the 542th Regiment of the 88th Division of the National Revolutionary Army, led by Lieutenant Colonel Xie Jinyuan, to stay behind for four days and four nights in order to cover the Chinese principal forces retreating west.

Tasked with holding down the fort in Sihang Warehouse, a six-story building co-owned by Shanghai’s four major banks, they are joined by less-trained security corps from Hubei, Hunan and Zhejiang. Though their purpose was merely symbolic, the men are expected to die defending the warehouse.