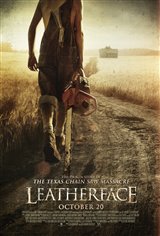 Leatherface tells the terrifying origin tale of the murderous psychopathic killer. It begins with his youth as a child in Texas, when he's placed into a mental institution after being involved in a weird incident that wound up with the town sheriff's daughter dead. The boy grows into a troubled teen who manages to escape the confines of the mental hospital with other inmates.

The authorities begin their hunt for the young man, including the angry sheriff who is trying to avenge his daughter's death, but it will prove to be a gruesome affair as the young and deranged teen begins a violent rampage.