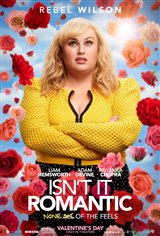 Australian-born Natalie (Rebel Wilson) works hard at the offices of Langley & Byron Architects in New York City. Although she loved romantic comedies when she was young, she now believes they're lies, because her mother told her things like what happened in those movies don't happen to girls like her.

Now a complete cynic, she decides to try to stay open to the possibility of love on the advice of a co-worker. Unfortunately, that makes her a prime target for a mugger in the subway. Thinking he wants to get to know her, she's dismayed when, after introducing himself, he grabs her purse and makes a run for it. She gets it back, but is knocked out cold in the process. When Natalie wakes up in the hospital, she discovers to her amazement that her life has suddenly become a romantic comedy in which she's the leading lady, complete with a hot Australian leading man (Liam Hemsworth).