I Am Not Madame Bovary 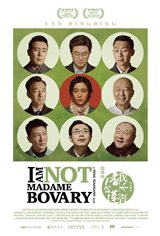 A café proprietor named Li Xuelian (Fan Bingbing) is swindled by her ex-husband, after he falsely accuses her of having an affair. She begins a legal journey from her small town to the big city to petition for over a period of 20 years to prove her innocence.

Along the way, her case shakes up local government and a number of officials have to step down from their positions. The film's sense of humor is said to spring from the absurdness that can exist in reality.