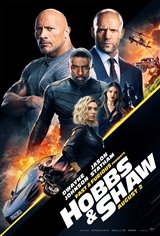 After a cyber-genetically enhanced super soldier and anarchist named Brixton Lorr (Idris Elba) ambushes and kills the MI6 team led by Hattie Shaw (Vanessa Kirby) that was tasked with recovering a potential bio-weapon, Hattie injects herself with the pathogen to prevent it from falling into Brixton's hands. Infected, she goes on the run from Brixton to find an antidote before it kills her and wipes out a large part of the world's population.

American Diplomatic Security Services agent Luke Hobbs (Dwayne Johnson) and Hattie's estranged brother, British rogue agent Deckard Shaw (Jason Statham) are each dispatched to find her and bring her in. Sworn enemies, the two reluctantly partner up to save Hattie and the world when it becomes clear that neither of them can stop Brixton alone.