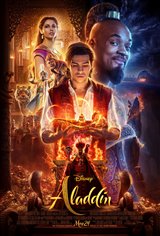 Princess Jasmine (Naomi Scott) wants to escape the confines of the palace and her father the sultan (Navid Negahban), who wants her to get married to Prince Anders (Billy Magnussen).  Once outside the palace and on the streets of Agrabah she encounters the poor but warmhearted Aladdin (Mena Massoud), who is known as a scoundrel and a thief, but who charms his way into her heart.

The evil sorcerer Jafar (Marwan Kenzari), the Grand vizier of Agrabah is the chief advisor to the Sultan, but he is secretly devising a plot to unseat the Sultan and rule Agrabah for himself. In order to stop Jafar, Aladdin discovers the Genie's lamp in a cave, rubs it, and sets the mystical entity free, leading the Genie (Will Smith) to pledge his undying loyalty to the youth. Aladdin begins his quest to defeat Jafar and win the hand of the princess, with the Genie's help.