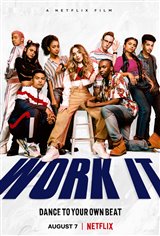 High school senior Quinn Ackerman (Sabrina Carpenter) wants to go to Duke University, the school her late father attended. When she has an entrance interview there, she's told she needs another extra-curricular in order to stand out and have a chance of getting in. She tells them she's on the school dance team, but in actuality, she can't dance. At all.

Her friend Jas (Liza Koshy) is a good dancer, so Quinn asks her for some coaching so she can get on the school dance team, The Thunderbirds. Unfortunately, it's too little, too late. Quinn doesn’t make the cut. Undeterred, she decides to create her own team, along with Jas.

Since The Thunderbirds have all the best dancers in school, they look to recruit several underdogs, as well as top choreographer Jake Taylor (Jordan Fisher) to help take their team all the way to the championships. Along the way, sparks quickly fly between Quinn Jake.