When the Storm Fades 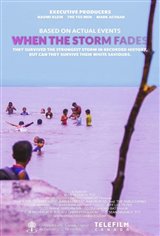 Following the devastation of Typhoon Haiyan/Typhoon Yolanda in 2013, when 19-foot waves hit the Philippines, life changed for many residents.

The Pablo family, living in Leyte Island's Tacloban, one of the hardest-hit cities, try to get on with their lives. The lot where the house of Nilda's sister Ia once stood is now in ruins, but even worse, Ida was killed in the storm.

Nilda, her husband Abner and their two children, Arnel and Lovely, meet Trevor (Aaron Read) and Clare (Kayla Lorette), two Canadian "voluntourists" who have the best of intentions. They arrive in the Philippines to help out by planting mangroves, but are more interested in getting selfies for Instagram.

Part documentary, part drama, the members of the Pablo family play themselves in the When the Storm Fades.

Funded by Telefilm Canada and the Canada Council for the Arts. Director/writer Sean Devlin is based in Vancouver and actors Aaron Read and Kayla Lorette are Canadian.