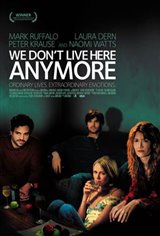 In their small New England college town, Jack Linden (Mark Ruffalo) and Hank Evans (Peter Krause) are the best of friends. Fellow instructors at the university, the two enjoy the camaraderie of men who have shared interests and similar circumstances.

Both fathers of young children, the men's home lives, however, are markedly different. The Linden household is chaotic and cluttered; Jack's wife Terry (Laura Dern) is a headstrong woman but a distracted homemaker. Hank's Edith (Naomi Watts), on the other hand, keeps an immaculate home.

The couples have each other over for dinner often, enjoying the conversation and company, laughing and flirting as friends do. But Jack and Edith have been disappearing at the same time lately, and Terry is beginning to notice.