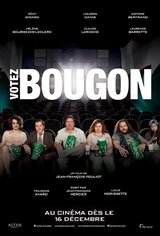 Encouraged by his family, Paul Bougon decides to enter into politics. He founds, in collaboration with his family, the National Ecourement (Sickness) Party (PEN), which relies on the sale of membership cards and illegal donations. He tries to convince his fellow citizens that through him, change will come. Quebeckers believe in Bougon’s promises and elect him Premier of Quebec.

Paul then moves with his daughter, his son and his brother to Ottawa, where each of them will have a role to play in Bougon’s government. Meanwhile, Rita Bougon, who doubts her husband's love for her, has traveled south with her sister and falls in love with a handsome Cuban named Chico.