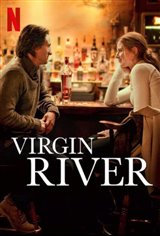 Searching for a fresh start, Melinda Monroe (Alexandra Breckenridge) answers an ad to work as a nurse practitioner and gets the job. She moves from Los Angeles to the remote northern California town of Virgin River, where Doc Mullins (Tim Matheson), an elderly doctor with whom she's supposed to work is surprised by her appearance and declares he doesn't need her help.

She also finds the rustic cabin she's supposed to stay in is in poor condition. Just as Mel is on the verge of leaving, the woman who hired her, Mayor Hope McCrea (Annette O'Toole) convinces her to give them another chance. She steers her to the local bar, Jack's, to get something to eat.

At Jack's, Mel meets the owner, Jack Sheridan (Martin Henderson), who is kind and gives her some tips about living in Virgin River. After he takes her to see some of the natural beauty that surrounds the town, she slowly starts to settle in and eventually grows to love the town and its inhabitants.