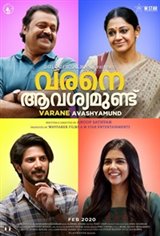 Varane Avashyamundu is a story of a mother and a daughter settled in Chennai. Neena, the mother is a French teacher and a single parent to her daughter Nikitha (Nikki). Nikki, who works in a private bank, is obsessed about the concept of 'arranged marriage', partly because of her mother's failed marriage.

The conflicts in the lives of the protagonists, their back stories and the inner emotions come under the same roof and how each of them helps each other to get out of it, form the crux of the film.