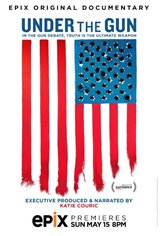 Produced and narrated by Katie Couric, this film takes a look at the increase of gun deaths and mass shootings in America, and the people who are responsible for keeping the gun debate fierce and the progress slow.

It takes a look at families who were impacted by the mass shootings in Newtown, Aurora, Isla Vista and Tucson, as well as those who experience daily gun violence in Chicago. The documentary examines why politicians find it difficult to act, thereby allowing the epidemic of violence to persist.