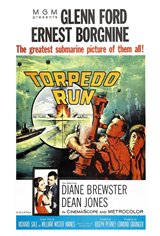 Lieutenant Commander Barney Doyle is in charge of the submarine whose task it is to destroy the Shinaru, the Japanese aircraft carrier which launched the attack on Pearl Harbor.

Doyle undertakes this mission, despite the fact that there is a transport in the way which is carrying his wife and child, captured by the enemy and being used as a shield to protect their vessel.