The Works Of Wayne Ewing Showcase 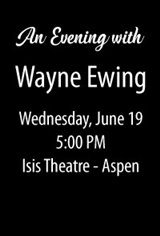 We're proud to showcase the work of local filmmaker Wayne Ewing for a special evening of viewing and dialogue. Aspen Film will screen the pilot episode of Ewing's recent Polo Es Mi Vida series, followed by his 2008 doc BORDER WALL, which has as much relevance today as it did 11 years ago.

The two screenings will be followed by a conversation with Ewing.Emmy Award-winning filmmaker Wayne Ewing, is well known for his tv documentaries & independent films, including four about Gonzo journalist Hunter S. Thompson. Ewing works as a gun-for-hire, directing, shooting, and editing commercials, documentaries, and episodic dramas for television.

He is credited with changing the look of procedural dramas in the nineties by creating the visual style of "Homicide: Life on the Street" for NBC as the original Director of Photography and Director of the show. Ewing is based in the Roaring Fork Valley near Aspen, Colorado.