The SpongeBob Musical: Live on Stage! 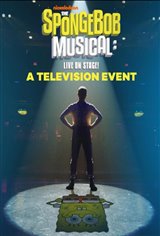 The story of the musical follows SpongeBob Squarepants (Ethan Slater), who works at the Krusty Krab restaurant. When a position as manager opens up, he tells his boss, Mr. Krabs, that he's interested in being manager, but Mr. Krabs laughs at him, telling him he's not manager material.

When a violent tremor caused by volcano Mount Humongous means the volcano is about to explode and wipe out the town of Bikini Bottom, the townsfolk panic, believing it's end of the world. SpongeBob convinces his friend Patrick (Danny Skinner) to come with him and Sandy Cheeks (Christina Sajous) to climb the volcano, and using a bubble device built by Sandy, stop it from erupting and wiping out their town.