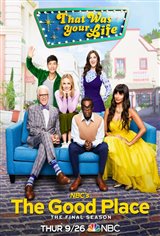 Eleanor Shellstrop (Kristen Bell) discovers after death that she's been sent to "The Good Place," a wonderful, Heaven-like utopia designed by Michael (Ted Danson) as a reward for living a righteous life. Knowing that she has a morally imperfect past, she realizes a mistake must have been made, but not wanting to be sent to the Bad Place, she decides to try to hide her past, while trying to be a better person.

The Good Place is a paradise with shops filled with treats, including a frozen yogurt shop that offers every color and flavor you can imagine. It also comes with an artificial intelligence guide named Janet (D'Arcy Carden), who can solve problems for the residents. However, they slowly realize that all is not as it appears to be.