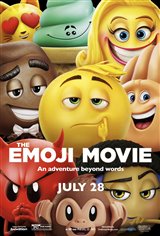 All your favorite emojis live in the bustling city of Textopolis, hoping to be selected by their phone's user. Each emoji only has one facial expression — that is, with the exception of Gene (T.J. Miller), an exuberant emoji who, because he was born without a filter, has numerous expressions.

Instead of being happy to be diverse and unique, Gene just wants to be "normal" like the other emojis. He gets his best friend Hi-5 (James Corden) and notorious code breaker emoji Jailbreak (Anna Faris) to join him on an epic "app-venture" through the apps on the phone to find the code that will fix Gene. They soon encounter a greater danger that's threatening the phone and the fate of all emojis. The three unlikely friends have to move quickly or their world will be deleted forever.