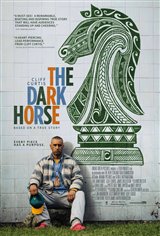 Based on the true story of New Zealand's Genesis "Gen" Potini (Cliff Curtis), The Dark Horse is a story of redemption and hope.

When Gen is released from an institution where he was being treated for bipolar disorder, the former chess prodigy is put in the hands of his older brother Ariki, who happens to be the leader of a street gang. As Ariki plans for the initiation of Gen's teenage nephew Mana (James Rolleston) into the gang, Gen decides to volunteer his time and serve as coach to the youth of the Eastern Knights Chess Club.

As he inspires the members of the club, Mana takes notice and recognizes his own affinity for the game, as well as his desire to rise above a life of gang violence.