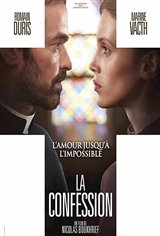 In a French village under German occupation, Barny (Marine Vacth), who has had no news about her husband since he was captured at the beginning of the war, hides a Jewish family under her roof. The young communist mother, who sent her little girl to stay at her grandmother's house in the country, openly displays her contempt for religion. One morning, in defiance, she enters the confessional and confronts the new pastor, Father Morin (Romain Duris), on his beliefs and on the limits of his ministry in these troubled times. To her surprise, Barny discovers a charming, intelligent, and above all very humble man. Over the course of their discussions, the young atheist decides she would like to convert to Catholicism. But she has to ask herself whether she’s really attracted to the religion… or the priest ?