The BIG SICK with Bonus Content THE BIG(GER) SICK 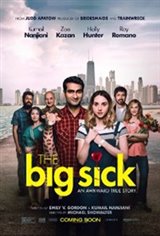 The Big(ger) Sick: Stick Around for More Laughs is a one night only in-theatre event! On Thursday night, July 13th, moviegoers who buy a ticket to The Big Sick will be treated to a behind-the-scenes look at The Big Sick Comedy Tour, which featured stand-up comedy performances from cast members such as Kumail Nanjiani, Ray Romano and Judd Apatow.

The Big(ger) Sick: Stick Around for More Laughs will play after the credits roll on The Big Sick.