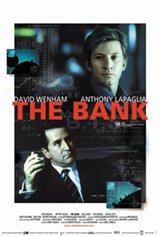 A young man fascinated with the workings of the world of banking forms an alliance with an unscrupulous corporate predator in this drama.

Jim Doyle (David Wenham) developed an interest in finance while he was a young boy growing up in a small Australian town, and as an adult he and his partners have developed BTSE (Bank Training Simulation Experiment), a sophisticated computer program that can anticipate the ups and downs of the world's money markets.

Jim's program attracts the interest of Simon O'Riley (Anthony LaPaglia), the head of a major Aussie financial services corporation, Centabank; O'Riley is looking to cut costs and increase profits, and he's convinced BTSE can help him do just that.

However, O'Riley has other, more aggressive ways of boosting his bottom line; Centabank has been shutting down small-town branch offices that have been faithfully serving customers for decades, and has developed a new enthusiasm for foreclosing on loans from smaller customers having trouble making ends meet.

Two such customers are Wayne and Diane Davis (Steve Rodgers and Mandy McElhinney), who obtained a loan to start their own business building houseboats; when the local economy went into a nosedive, the Davises found themselves under the thumb of Centabank, and the bank's hounding of the couple led to an unfortunate accident that took the life of their young son.

Determined to make Centabank pay for their son's death, Wayne takes on the corporation with the help of Stephen (Mitchell Buell), an activist lawyer. Jim, meanwhile, becomes romantically involved with Michelle (Sibylla Budd), a Centabank employee, and through her gets a clearer idea of just what O'Riley is trying to do.