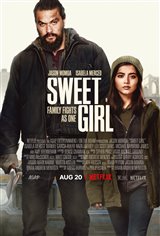 After the death of his wife who had terminal cancer, Ray Cooper (Jason Momoa) devises a plan for revenge against the pharmaceutical companies who killed her by taking their life-saving drugs off the market.

Devastated and vengeful, Ray begins to uncover the truth behind corrupt Big Pharma. But as his actions intensify, the corporations strike back by threatening his life and the wellbeing of his young daughter Rachel (Isabela Merced). The pair must face dangerous obstacles as Ray fights to protect Rachel's life while exposing the greed of the pharmaceutical industry.