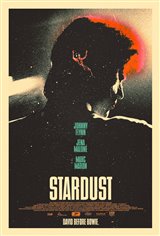 Following his 1969 breakout success, "Space Oddity," David Bowie (Johnny Flynn) has a number of singles that flop, leaving many to wonder if he's just a one-hit wonder.

When his 1970 album, The Man Who Sold the World, receives a lukewarm critical reception in England, Bowie decides to act fast. Ron Oberman (Marc Maron), a publicist at his American label, Mercury Records, suggests Bowie do a U.S. promotional tour. Unfortunately, things don't go well. Bowie is stopped at the airport as the immigration officers question his sexuality, due to his appearance.

Once through security, Ron and his mother meet Bowie and put him up in a bedroom of their modest home. Although the management team fails to obtain a work visa that would allow Bowie to perform, Ron sets up interviews and books under-the-table gigs, including a vacuum cleaner salesman convention, as he drives the rock star and his wife Angie (Jena Malone) around in a beat-up station wagon.

However, the tour had one extremely positive outcome—it inspired Bowie to reinvent himself as Ziggy Stardust.