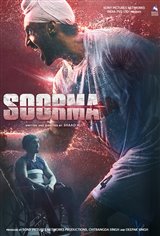 As a young child, Sandeep Singh decided he didn't have any talent when it came to field hockey. Years later, when he meets a talented female player named Preet (Taapsee Pannu), Sandeep (Diljit Dosanjh) gives it his all, working day and night to get to his goal of becoming a great player. His dreams come true when his team is headed to the World Cup.

On August 22, 2006, that changes when an accidental gunshot paralyzes Sandeep from the waist down. India, which lauded him as a champion, forgets about him. His girlfriend, Preet, doesn't answer the phone. Feeling abandoned, Sandeep faces the second biggest challenge of his life when he struggles to get back on his feet. When he makes a miraculous comeback, the news makes the headlines in India.