So I Married an Anti-Fan 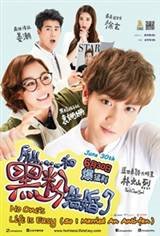 When a female reporter named Miaomiao Fang (Yuan Shan Shan) snaps a photo of Korean pop star Houzhun (Park Chan Yeol) with a fellow idol Ai Lin (Seo Joo Hyun) at a nightclub, she finds out more about his personal life than she bargained for. When she refuses to give the password to her phone that has the photo on it, Houzhun slams it the the ground, destroying it.

To ensure his image is kept squeaky clean, Houzhun goes so far as to convince the magazine Miaomiao works for, Women Sense, to fire her. In revenge, Miaomiao becomes his number-one anti-fan — organizing online and live protests against the musician, and ultimately doing everything in her power to destroy Houzhun.