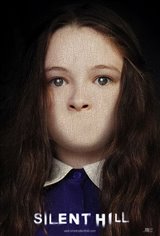 The eerie and deserted town of Silent Hill draws a young mother, desperate to find a cure for her daughter's bizarre illness. Unable to accept the doctor's diagnosis that her daughter Sharon should be permanently institutionalized for psychiatric care, Rose (Radha Mitchell) flees with the girl, heading for the abandoned town in search of answers and ignoring the protests of her husband Christopher (Sean Bean).

It's soon clear this place is unlike anywhere she's ever been. It's smothered by fog, inhabited by a variety of strange beings and periodically overcome by a living Darkness that literally transforms everything it touches. As Rose searches for her little girl, she begins to learn the history of the strange town and realizes that her daughter is just a pawn in a larger game.

Based on the best-selling survival video game.

Canadian Connection: Filmed in and around Toronto, Ontario. Several cast members are Canadian.