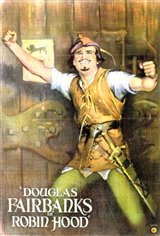 The Earl of Huntingdon (Douglas Fairbanks) learns from his beloved Lady Marian Fitzwalter (Enid Bennett) that the throne of King Richard the Lion-Hearted (Wallace Beery) has been usurped by his treacherous brother, Prince John (Sam De Grasse) while the king was off fighting the Crusades.

Huntingdon adopts the name Robin Hood and gathers a band of merry men led by the stalwart Little John (Alan Hale) to fight the prince and his henchman, the High Sheriff of Nottingham (William Lowery).