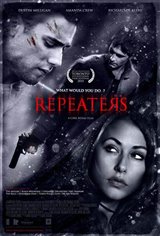 On a random Wednesday, the residents of a rehab centre in Mission, B.C. are granted a rare one-day-pass to venture back into the world and make amends with those they have wronged. Kyle (Dustin Milligan) reaches out to his kid sister, who refuses to speak to him. Sonia (Amanda Crew) decides not to confront her ailing, abusive father in the hospital, only to learn later in the day that he has died. Meanwhile, Weeks (Richard de Klerk) is left feeling powerless and quietly enraged after visiting his violent father in prison.

This rotten Wednesday is one that none of the protagonists want to live through again, yet that is exactly what happens when they wake up the next day, and the day after that, and the day after that. Compulsive repetition suits these addicts just fine, and before long they embrace the opportunity to make the daily slate as messy as possible, knowing that it will soon be wiped clean. But after allowing themselves some missteps, both minor and massive, Sonia and Kyle realize that their freedom from consequences has set Weeks on a path of sadistic annihilation. With every attempt to contain his violence, Sonia and Kyle go through one hellish day after another, searching for meaning and clarity where none can be found.