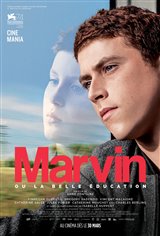 Marvin Bijou, raised in a rough working-class family in the Vosges, grows up surrounded by homophobes, including school bullies and his own violent father.  Marvin keeps quiet about his attraction to the same sex but even so, the kids at school make things tough for him. Encouraged by the new director of his high school, he’s admitted to a drama program in Épinal. Then, as an adult, he moves to Paris where, thanks to support from a couple of artist friends, he creates an autobiographical solo show that’s a great success. In a bar, the young man meets Roland, a rich patron of the arts, who becomes his sugar daddy. Following Roland’s death in a car accident, one of his acquaintances, famed actress Isabelle Huppert, takes Marvin under his wing. After reading his play, the famous actress suggests she play the role of his mother.