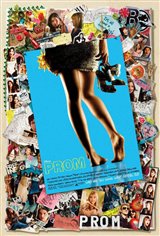 At Prom, every couple has a story and no two are exactly alike. Several intersecting stories unfold at one high school as the big dance approaches; PROM portrays the precarious passage from high school to independence as some relationships unravel and others ignite. For Nova Prescott (Aimee Teegarden), it's a battle of wills as she finds herself drawn to the guy (Thomas McDonell) who gets in the way of her perfect prom. Fellow seniors Mei (Yin Chang) and Tyler (De'Vaughn Nixon) harbor secrets, while others face all the insecurity and anticipation that surrounds one of high school's most seminal events.

There are hundreds of nights in high school, but there's only one PROM.