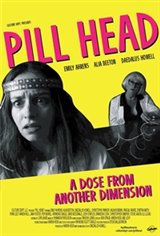 After an overdose, art student Theda becomes an unwitting specimen in her university's experimental psych program. But there's a side effect - she begins to see into an alternate universe. As her alternate self wards her off the program's enigmatic researcher Dr. Ashe, she becomes determined to escape.

Theda's salvation lays through the looking glass of quantum quandaries, a romance revisited, and the jagged little pill of her own nature. Original motion picture soundtrack by Shannon Ferguson of NYC's Longwave. Produced by Karen Hess. Written and directed by Daedalus Howell.