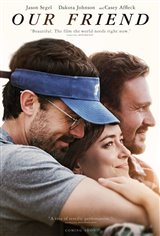 When Nicole Teague (Dakota Johnson), 34, is diagnosed with terminal ovarian cancer and it's estimated that she has just six months to live, her husband Matthew Teague (Casey Affleck) takes it hard. As he tries to adjust to the shock that Nicole doesn't have long to live, Dane (Jason Segel), the couple's longtime friend, tries to help him get through it.

Two months later, Dane decides to move into the Teague's home and put his own life—his job, his apartment, his other friends—on hold. When Nicole has to shave her head, Dane shaves his to match. He takes care of the Teagues' two little girls when Matthew has to take Nicole to the hospital. He tends to Nicole when Matthew just can't bring himself to do it. Dane's impact on everyone is much greater—and more profound—than anyone could have imagined.

Based on the National Magazine Award winning Esquire article by Matthew Teague, "The Friend: Love Is Not a Big Enough Word."