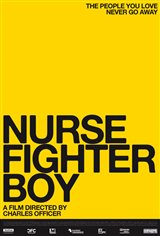 Nurse.Fighter.Boy is the story of three archetypal characters: the nurturer, the warrior and the child.

Jude (Karen LeBlanc) is a nurse and single mother living with Sickle Cell Anemia. She works nights at the City Hospital to provide for her 12-year-old son, and dreams of returning home to Zion (St. Elizabeth, Jamaica).

Silence (Clark Johnson) is a fighter, intent on trusting no one. As a child, he was raised in a world bent on violence. When the untimely death of his trainer and father figure hits him, Silence struggles to understand what he's fighting for. After a messy late-night brawl, Silence goes to the hospital for care. There he meets Jude who dresses his wound. Their connection is unspoken, but palpable.

Ciel (Daniel J. Gordon) is a boy, wise beyond his years. He knows when his mother feels "bad inside" although she tries not to show it. Taking matters into his own hands, Ciel secretly casts a spell with his red handkerchief, "healing moon, faith and power, protect my mother this very hour". Unknowingly, his incantation triggers a series of encounters between his mother and Silence.

Passionately, the Fighter begins to fall in love with the Nurse. Tentatively, the Nurse begins to trust her heart. Wondrously, the Boy's incantations conjure a potent love for his mother, and a protector for himself.