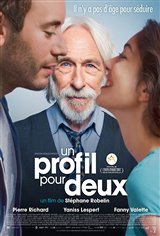 To find out what her father Pierre, an octogenarian living alone in a large Paris apartment, does when she’s not there, Sylvie asks Alex, an aspiring but unemployed writer, to teach him the basics of the Internet.

Suffering from loneliness since the recent death of his beloved wife, the old pensioner takes advantage of his new knowledge to create a fake profile on a dating site, using a photo of Alex. A woman soon takes the bait. Charmed by the erudition and sensitivity of the supposed 30-year-old man, the pretty single asks to meet him in person at a café.

Pierre pays Alex to go on the first date, while he watches from a nearby table, with the intention that he’ll reveal himself for the second date. Alex is reluctant, because he already has a girlfriend.