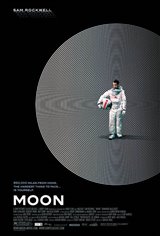 Nearing the end of a three-year contract with Lunar Industries, Sam Bell (Sam Rockwell) is counting the days until his return to Earth. The lone occupant of a lunar mining base, Sam monitors the tractors that harvest the moon's surface for helium energy. Buoyed by sporadic transmissions from his wife and young daughter, he combats monotony and isolation by tending to plants, continuing his predecessor's woodcraft project, and interacting with the station's robotic computer, Gerty.

But Sam is beginning to unravel mentally. After a hallucination causes him to crash his lunar rover, he wakes up in the sick bay and soon realizes that his life at the base is not what it seems.