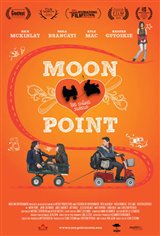 Darryl Strozka (Nick McKinlay), a 23-year-old who still lives with his mother, decides to find Sarah, the girl he had a crush on in elementary school.

Sarah, who moved away years ago, has become an actress. She's shooting a horror film called Blood Lust in the nearby town of Moon Point. He hops a ride in a wagon attached to his best friend's Femur's electric wheelchair.

Along the way, they meet up with a girl named Kristen (Paula Brancati), who's car has broken down, and they give her a ride. The three of them experience a series of adventures as they slowly make their way to Moon Point.