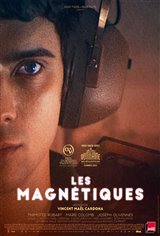 At the beginning of the 1980s in Brittany, Philippe, the shy son of a garage mechanic, turns out to be a genius in sound when it comes to highlighting the performances of his big brother Jérôme, on the microphone of their pirate radio. Despite the fact that Jérôme is an unpredictable hothead, Philippe admires him, and can’t help from falling in love with Jérôme's girlfriend, Marianne. When Philippe is called up for compulsory military service and drafted to Germany, the introverted young man finds a job on British radio in West Berlin.