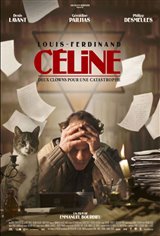 In 1948, Milton Hindus, a young Jewish-American writer, visits his idol, Louis-Ferdinand Céline. Céline is a French novelist living in exile in Denmark with his wife, Lucette, because the French government has accused him of collaborating with the Nazis. Céline sees in Hindus a fierce defender of his work and asks that he help him plead his case to the United Nations. But all Hindus wanted was to understand the writing process behind Céline's books in the hopes that he would be able to someday achieve his own literary greatness.

Céline's wife Lucette seeks to find a compromise. In vain. Over the course of his stay, Hindus becomes more and more uncomfortable as he begins to realize how fully his host is an anti-Semite.