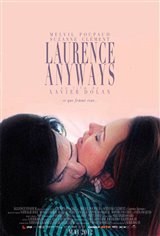 Montreal, 1989. Laurence (Melvil Poupaud), who teaches literature at a CEGEP, has lived for two years with Fred (Suzanne Clément), the love of his life. On his 30th birthday, Laurence decides it's time to tell Fred the truth about who he really is. And so he confesses to his girlfriend that although he's madly in love with her and he doesn't want to lose her, he's a woman trapped in a man's body and wants to undergo a sex change.

Although Fred feels betrayed at first, she decides to stay and help Laurence with his transformation. But the changes in daily routines and family pressure begin to take their toll on the unusual couple. Laurence winds up losing his job after he starts dressing as a woman at school and it isn't long before Fred begins to resent Laurence for wanting her in spite of his decision to be a woman.