Last Call at the Oasis 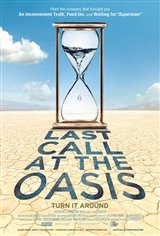 Water is the Earth's most valuable resource, but scientists, activists and private citizens are worried that there is an impending global water crisis. Water has become polluted with toxic chemicals and agricultural and industrial waste and they fear that in the near future there won't be enough water to sustain life on the planet.

Featuring a cameo by Erin Brockovich.