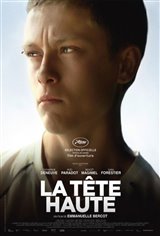 Malony Ferrando first stood in front of Juvenile Judge Florence Blaque when he was only six. With his mother’s agreement, the violent boy is placed in a home for troubled children. Malony’s problems worsen and when he is 16, Judge Blaque sends him to a school for juvenile delinquents and assigns Yann Le Vigan, a former offender, to be his teacher.

While there Malony meets Tess, a shy girl who quickly grows fond of him. But he gets discouraged by the obstacles he faces in trying to reintegrate into the school system and in finding a job. Disillusioned, Malony decides to kidnap his half-brother Toni, who’s also in a home for troubled youth, in order to spend Christmas with their mother. But when Malony crashes a car, he’s sentenced to a month in prison, and soon after learns Tess is pregnant.