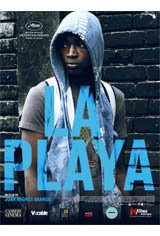 Having fled his war-ravaged village, Tomas, an Afro-Colombian teenager, takes refuge in La Playa, a rough neighborhood in Bogota. He doesn’t get along with his stepfather and his little brother, Jairo, a junkie who spent three months on the street, causes a lot of tension in the family as well. When Jairo disappears again, Tomas leaves home to look for him. His quest leads him into a district with a large number of barbershops specializing in African hairstyles. Tomas is given a chance to learn the skills of creating elaborate patterned haircuts as he becomes an apprentice barber. However, his older brother Chaco is adamant that their only chance of survival is to flee the country and tries to convince Tomas to go with him.