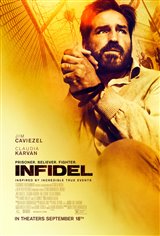 Doug (Jim Caviezel), an American Christian journalist/blogger, is invited to Cairo to speak at an interfaith conference about recent military uprisings. Knowing it's dangerous for an American to travel to Egypt and that travel warnings are in place, his wife Liz (Claudia Karvan), who works for the State Department, doesn't want him to go, but he downplays her fears.

Following an appearance on Cairo TV during which Doug talk about Jesus, there's an uproar. He goes back to his hotel room and while he's talking on the phone to Liz, a group of men break in. Doug is taken hostage by the Iranian regime and thrown into a notorious Tehran prison filled with political prisoners, where he's interrogated and tortured, then put on trial for trumped-up charges of espionage. When he's found guilty, he's sentenced to death by firing squad.

Liz quickly learns the American government isn't going to do anything to help her husband, so she goes to Iran to try to free him herself.