I Kissed a Girl 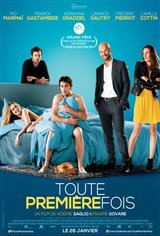 As Jerome, the co-founder of a research institute, gets ready to marry his longtime companion, he wakes up one morning next to Anna, a young Swedish woman. Upset because the event reveals his confusion about his sexual orientation, he follows the advice of his best friend Charles and decides to meet Anna in the light of day, in the hope of breaking the spell and getting clarity. Instead, his desire for her is confirmed and strengthened.

In a final attempt to turn things around, Jerome agrees that Charles, an incorrigible playboy, should seduce Anna and sleep with her, but the plan fails and the next day the young woman finds herself employed at the research institute. That’s when, amongst the lies and pretense, the young gay man begins a double life.