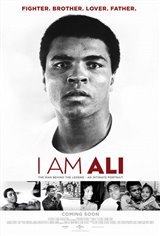 Widely considered to be the greatest heavyweight boxer in history, Muhammad Ali affected a generation with his social activism and his belief in religious freedom. His legacy makes him one of the most recognizable sports icons of the 20th century.

In this new documentary, fans are given unprecedented access to his life through personal audio, testimonials and private interviews with his family and friends, including his sons, daughters, his former wife and boxing legends George Foreman and Mike Tyson.