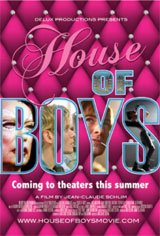 Luxembourg, 1984. Frank, 18, leaves home to live in Amsterdam. The young gay man finds refuge in a tavern, the House of Boys, run by an authoritarian boss whom everyone calls Madame. Frank quickly becomes the star of the dance club, eclipsing Jake, a young American heterosexual. Captivated by his charm, Frank does everything he can to seduce Jake and, against all odds, eventually succeeds. But their budding relationship takes a dramatic turn when Jake, following an overdose, discovers he's carrying the AIDS virus, a deadly new disease that mainly affects homosexuals.