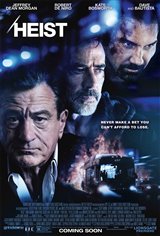 Vaughn (Jeffrey Dean Morgan) asks a casino owner called The Pope (Robert De Niro) for $300,000 to pay for his daughter's medical treatments, but not only does he not get the loan, he's thrown out.

He teams up with a man named Cox (Dave Bautista) to rob the casino. They make off with $3 million but when their plan goes awry, they hijack a bus and take its passengers hostage. With The Pope's goons and a SWAT team after them, Vaughn and Cox have to see their plan through all the way to the end.