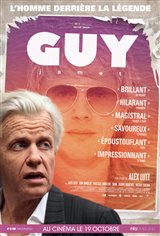 Just before she dies, Gauthier's mother tells him that his father is none other than the famous Guy Jamet, of whom she was a fan.

The journalist immediately begins making a documentary about the singer, who was very popular between the 1960s and the ‘90s. Without revealing his true identity to Jamet, Gauthier films his concerts, thanks to the recent release of a cover album.

The journalist also documents the daily life of the singer at his small property in Provence, which he shares with his horses and a younger actress, a new fan of canine astrology. But when he realizes Gauthier is only filming the negative or embarrassing moments of his life, Guy rebels.

The illegitimate son ends up understanding that behind the smiling façade of this artist from another era, lies a wounded and depressed man.